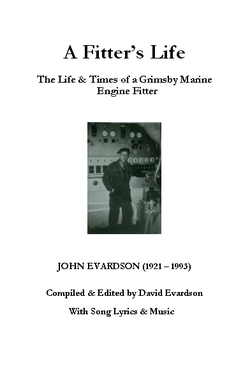 Some thirty years ago I asked my father John to recall his childhood on Grimsby’s West Marsh & his career as a fitter on Grimsby Docks.

It began as something to occupy Dad’s time after he retired early through ill health. We’d chat over a drink with the tape recorder running, & at first Dad doubted he could remember very much, but soon the old lock gates parted & a tide of memories soon came flooding through.

Before we knew it there was enough material for a book. We also took interesting episodes & made up songs about his various experiences & escapades. Music and lyrics were included in the publication, along with a couple of songs by friends Bob Pearson & Liam Duffy, which went on to sell about 650 copies.

The book aroused a lot of interest. John Mooney & Sylvia Moss of the Live Theatre company adapted the story & songs into a musical play entitled ‘West Marsh Story’, which enjoyed a couple of successful runs.

After his death in 1993, I found more material among Dad’s papers, which I always intended to ‘do something with one day’. As 2015 marks the thirtieth anniversary of his book, it's appropriate to integrate the new stuff with the original text and re-publish the work. It’s a lively read, with plenty of amusing anecdotes. I think people of all ages will enjoy sharing Dad’s memories.

Our good friend Dick Appleton produced a cassette of the songs at the time, featuring The Little Band (Julie, Max Bradley, Brian Massen & me, with help from Dick, Martin Campbell & Bob Pearson). It took very little effort to digitalise the vinyl tracks & produce the CD of 'Songs From A Fitter's Life' & I think the end result sounds very fresh.

Proceeds from sale of the CD will benefit St Andrew’s Hospice.

UK & Europe £4.95
USA $6.95
Canada CDN $9.39
​
Endorsement
‘A Fitter’s Life’  -  John Evardson
Whilst the men, women and ships may now have largely gone from the world-famous fishing trade in Great Grimsby, the poignant memories that have been handed down remain. In his entertaining book of stories and songs, John records, with nostalgia and gentle humour, his arduous life on land and at sea, as one of those who kept the trawlers sailing. From the scrimping and saving of early childhood years; through the constant struggle of raising a family of five; to enforced retirement though ill-health as a skilled engineer, one man’s achievements are re-told in an enjoyable and unforgettable tale of ‘A Fitter’s Life’. This is a book which will delight those who are old enough to remember, as well as appealing to those young enough to be enthralled, by life as it was, ‘down dock’.
Dr Mike Stopper
Educational Consultant